God specifically called GNN to northwest Nepal when He showed us personally how many people have never heard of Jesus or Christianity.

Our Mission Statement reads simply “Reach to Unreached”,  following the words of  Jesus to go into all the world and make disciples of all nations.  (Matthew  28 verses 18-20)

How You Can Help

Our Doctrinal Statement is simply the Apostles’ Creed, which you can read below.

GNN assists in emergencies such as earthquakes, mudslides that displace whole families, and clean water initiatives to all people in Northwest Nepal.

Learn About Our Work

Did you know that Nepalese people have no medical insurance? We have a fund to help our employees with urgent medical needs.

Three simple things, that’s all we do, but they make for a big mission: Evangelism, Discipleship and Church Planting.

Learn About Our Work

Good News Nepal started in 2013 when co-founder Philip Shahi and myself went to visit Philip’s home district, Humla, far up in the Himalayan mountains of Nepal.  The trip was meant to only be a day trip by airplane, then return to Nepalgunj where Philip now lives.  God had other plans!

While watching our return airplane come in for a landing to pick us up in Simikot, Humla, we were stunned to see our plane crash upon landing! The airport was forced to close and the only other way to get back to Nepalgunj was a 12 day walk up and down countless mountain sides. Instead, we waited and stayed in Simikot for 5 days. Thankfully, we got news that no one was seriously injured in the crash. 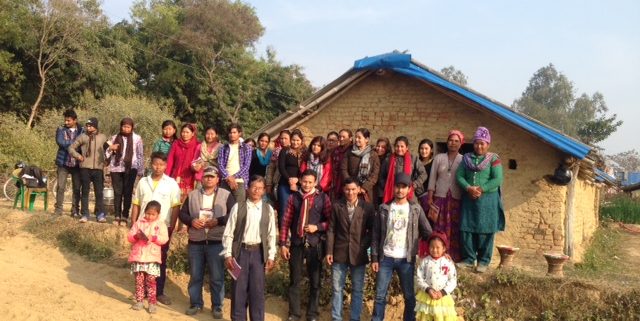 During our stay, however, I did find out one thing that totally shocked me: no one there had ever heard of Jesus. No one had ever heard of Christianity! One night in our little room both Philip and I felt that God was telling us to start a new mission to Western Nepal. Only to spread the Gospel of Jesus Christ. After the airport reopened we flew back to Nepalgunj and I continued on to the U.S. From there, we started following God’s plan to form Good News Nepal.

What a whirlwind it has been since! From no Christians in the Simikot area at GNN’s founding, we have, as of March 2016, 36 full time indigenous missionaries in Western Nepal. Hundreds have accepted Jesus into their lives.  We have 39 house churches, a evangelistic hospital ministry, 5 radio broadcasts of evanglistic messages on Hindu stations, a health plan, and so many joyous stories of lives changed that we could write a book!  We do nothing but say yes to what God Almighty calls us to do! This is in the first 2 years of our receiving our 501c3 designation!

Life in the high mountains is not easy. Some people said we could never get missionaries to go there. Philip told them they were right! But God could. And He did. This is truly a “1st century Mission” much like the first disciples experienced.

Please, if God prompts you, join us in spreading the Gospel to “Reach the Unreached”. The American Board are volunteers; your donation goes directly to Nepal except for a small administrative fee we use to run our office, to  balance the books in Nepal, and to visit and encourage our pastors in Nepal two times per year.

What God has in store we do not know, but we invite you to jump on board and see what He can do for a people group starving for the one true God. 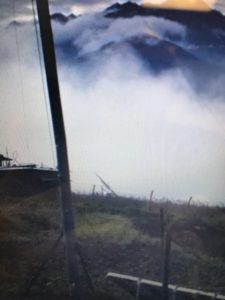 This is a picture of the plane crash that forced us to stay in Simikot.  you can see the plane just before the crash in the middle of the picture.  It’s left wing hit the runway, causing it to spin sideways into the weeds on the right of the runway. 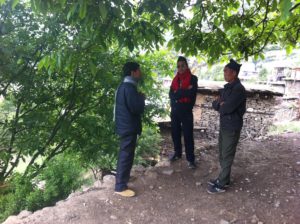 After the crash we met the men under the tree! 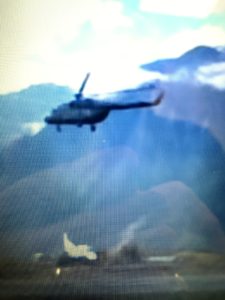 Months later the Nepalese Army helicopter is seen here removing the now wingless airplane from the Simikot airport.  Miraculously no one was hurt.  We continue to pray for the salvation of all of the 18 passengers, 2 pilots and one stewardess that were on board.

We believe in God, the Father Almighty, the Maker of Heaven and earth; and in Jesus Christ, His only Son, our Lord:

Who was conceived by the Holy Spirit, born of the virgin Mary, suffered under Pontius Pilate, was crucified, dead, and buried;

He descended into hell.

The third day He arose again from the dead;

He ascended into Heaven, and sitteth on the right hand of God the Father Almighty; from thence he shall come to judge the quick and the dead.

I believe in the Holy Spirit; the holy universal church; the communion of saints; the forgiveness of sins; the resurrection of the body; and the life everlasting.